History of the Method 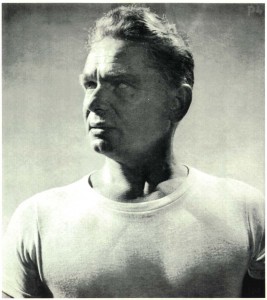 HISTORY OF THE METHOD

Joseph Hubertus Pilates was born near Düsseldorf Germany in 1880. He suffered from various illnesses as a child, including rickets and Asthma. In his youth he studied and became proficient at body building, diving, skiing, and gymnastics. In 1912 when he moved to England he earnt a living as a boxer, circus performer and a self defence trainer of English detectives. During World War 1 in 1915 he was interned with other Germans at a camp in Lancaster and later on the Isle of Man. He became a nurse in the camp and trained other internees in physical fitness exercises he had developed. Interestingly none of the inmates succumbed to the influenza epidemic that killed thousands throughout England in 1918.

In 1926, he sailed to the USA, and on the ship met his future wife Clara. When they arrived, they opened a studio in New York City. Pilates and his method, which he called “Contrology”, quickly established a following in the dance community. Well known dancers such as Martha Graham and George Balanchine became devoted to him and had their own students attend his classes for training, including the young ballerinas at the New York City Ballet. Pilates mixed and worked extensively with many other major innovators of the dance world including Ted Shawn, Ruth St. Denis, and Jerome Robbins. Pilates practiced what he preached and lived a long and healthy life. He died in 1967 aged 87.

Today his methods and exercises are used worldwide in sports, dance companies, theatre groups, fitness groups at gyms and health clubs, and in conjunction with various modalities of healing and injury management including physiotherapy, occupational therapy, Osteopathy, and Chiropractics.

PRINCIPLES OF THE METHOD

Over his career Joseph Pilates developed hundreds of exercises on different pieces of equipment which he invented. The guiding philosophy behind creating the apparatus and the movements was that the body must be used in its entirety to achieve good health. The Pilates equipment is designed to condition the whole body using movements which ultimately correct the body alignment and balance. The mobility and strength of the spine, including the surrounding musculature often referred to nowadays as the “core”, is one of the ongoing goals of training in the method.

The Method combines the best aspects of Western and Eastern traditions, blending the mind and body and viewing this unity working in harmony with one another.

The Eastern approach encourages calmness, a centered and whole being, emphasizing stretching and breath control.
The Western approach focuses on motion, muscle tone and strength. Joseph Pilates brought together both these approaches in his method. 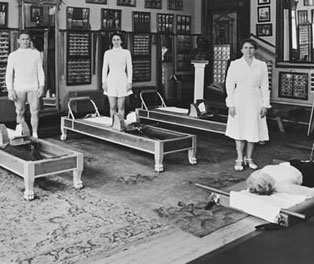 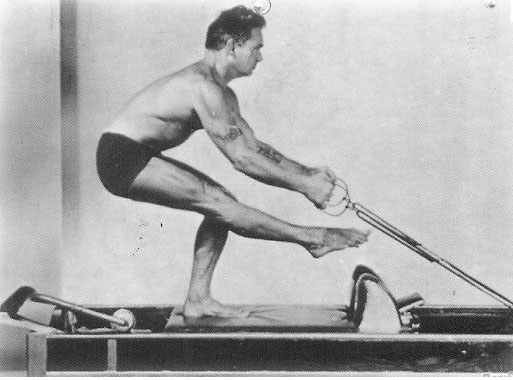 There are six basic principles of the Pilates method which are emphasized within the teaching:

There are other principles which different training bodies emphasize which include Stamina,Alignment,Commitment, Routine, and Isolation. These principles are all part of the total effect and attitude towards the method.

The Pilates Method strengthens and tones muscles, provides flexibility and balance, improves posture, unites the mind and body, and creates a long and more streamlined shape.

When the Pilates method is taught with intelligence and knowledge it can produce tremendous results for those whose goal is improvement in general fitness and awareness of their body. It also can be a wonderful adjunct to the rehabilitation from various debilitating injuries, restoring functional movement and stability in a remarkable way.
Whether because of a new consciousness or a great dissatisfaction with “unintelligent”, and “trendy” exercise programs, in the past five to ten years an incredible surge has developed in the mind/body focus movement.

The Pilates Method is now firmly entrenched in the world of movement and exercise therapy as a complete and balanced way to create a healthy mind, body and life. 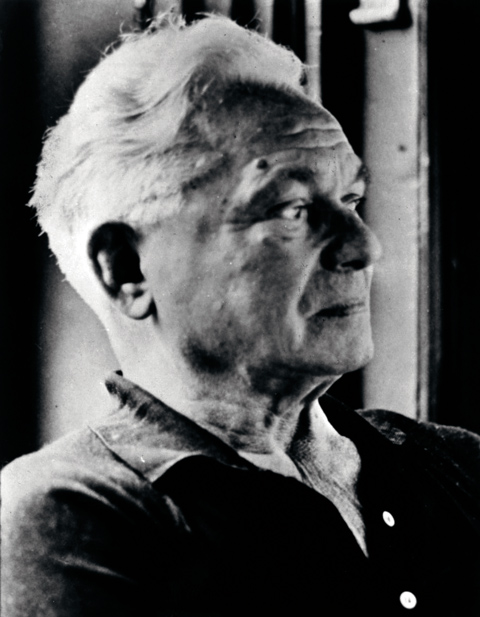